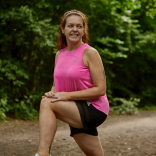 Lucy is a triathlete, run leader and fitness blogger. She’s…

Combining exercise with environmentalism, Plogging is the latest fitness trend to sweep the streets. The name is a combination of the Swedish words pocka upp and jogga which literally translates to pickup jogging- and that’s exactly what this workout is. The idea is to pick up litter whilst out running (walking or cycling also works too).

The average person might just ignore rubbish in their path, but plogging removes the taboo around picking up litter and turns it into a fun and social workout. The trend has gone viral on social media and inspired people worldwide to embrace the idea.
It’s a full-body workout too- you’ll be squatting and lunging to reach for litter and building upper body strength. The more rubbish you collect, the heavier the bag becomes! Remember to switch hands when carrying the bag to avoid creating muscle imbalances on one side of the body.
There’s also the feel-good factor- plogging is fantastic for both your wellbeing and the wellbeing of the planet. We are all responsible for our environment, so picking up a few pieces of litter is a proactive way to solve the problem. Plogging has the power to create real change- it empowers people to contribute to a cleaner, healthier community.

So How to Get Started?

It’s simple to get started as a plogger- you’ll just need a durable pair of gloves to protect your hands, plus a bag to collect the litter. You might also want to carry a small bottle of hand sanitiser to clean up afterwards.
Use your regular running route or vary it up- there’s plenty of litter to be found along rivers, canals, parks, beaches and woods.
Invite some friends- plogging is a social activity, plus you can cover more ground in a group. In fact, there are plogging groups springing up all over the country – if you are in London be sure to check out West London Ploggers who regularly head out to clean up areas of the Grand Union Canal.
Once you actively start looking for litter, it’s disturbing to see how much is actually out there and how it affects the environment. On a recent plogging expedition, we saw birds nesting in plastic waste on the canal side.

Use common sense when collecting litter- anything that is a potential health hazard such as nappies, needles, broken glass condoms are best left alone.

How to keep smiling during challenging times

The most predominant type of litter seems to be single-use food and drink packaging, particularly plastic bottles, coffee cups, bags and straws. These items are particularly detrimental to the environment as they can take up to 450 years to biodegrade and much of this plastic waste eventually ends up in our seas.
Once you’ve filled your bag with trash, make sure to dispose of it in the bin or at a recycling point.

There’s no need to limit your plogging to running. The idea is also spreading to cycling and SUP- anything that gets you outdoors and active whilst cleaning up. 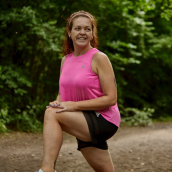 Lucy is a triathlete, run leader and fitness blogger. She’s happiest when outdoors either swimming, cycling or running. She started her fitness journey as a gym bunny, but it quickly developed into a passion for endurance sport and she has completed over 25 triathlons since her first in 2014. Lucy has recently qualified to represent Great Britain at the European Age Group Championships. She’s passionate about encouraging more women to get active, embrace sport and set themselves challenges.

My Skincare Routine: Dr Anjali Mahto from the Skincare Bible

What Does ‘Embracing Your Body’ Really Mean?

14 Valentine Gift Ideas for Your Galentines and Friends

How to use Clubhouse to grow your personal brand

3 Creative Ways to Use Instagram Reels for Your Brand

How to Declutter Your Home for the Last Time

5 Signs That You Are About to Experience Transformation

Why We Are Obsessed with Personality Types

Top Foods To Support Each Phase of The Menstrual Cycle

What Blue Monday Can Teach Us About Wellbeing

What You Can Expect From a Cacao Ceremony